Measuring Motherhood with a Broken Ruler, My Journey Through PPD- Volume 3

(This is part three in my series about my struggle with Postpartum mood disorders. There will be a few more parts to the series. If you or someone you know may be experiencing PPD, please check out the resources on my side bar. I used the picture to the left to demonstrate that PPD cannot usually be diagnosed based on how someone looks. Part One. Part Two.) 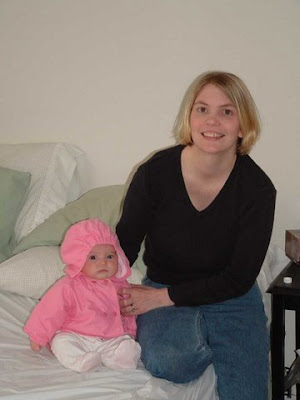 Early this morning, my sweet four-year-old daughter embarked on an adventure to grandma’s house. She’ll be staying with her Nannie for an entire week. Both my lips and my heart quivered as I kissed her goodbye. And, although I am looking forward to some one-on-one time with Pickle and time alone (my little guy still naps twice a day), I’m going to miss my delightful Pumpkindoodle.

A few years ago, however, my response would have been different. I did not enjoy motherhood until recently. In fact, I had many days when I wanted to run away. As much as I loved my daughter, I felt burdened both by her demands and my inadequacies. I’m not certain how to measure the role PPD played in my drama, but it was significant.


I ended part two of this series with the words, “I need help.” The Professor, did not understand the crushing grip PPD had on my mind and body, but he loved me enough to know something was terribly wrong, and that professional help was mandatory. Unfortunately, in our naivety, I only received just enough help to keep me partially together.

During Pumpkindoodle’s eight-week check up, just one day after my I began exploring the abominable option of ending my life, I confided in her pediatrician that I was not “feeling like my self.” She asked if I wanted to hurt my baby. I replied no, because I didn’t want to hurt my baby. I wanted to tell her about the thoughts of being afraid that I would hurt my baby, but terrified that she’d take my child from me, I kept quiet. She then asked if I wanted to hurt myself and I told her that the thought had crossed my mind. She frowned. “You’re going to need medication.” She gave me a prescription for a low-dose of a popular antidepressant and included a year’s supply of refills.

Thinking I had the magic antidote, I filled the prescription and began taking the small pills. I kept my condition secret. A close friend and neighbor whose baby was just three months older than mine shared with me her PPD experience. I listened intently, but it took me several weeks to tell her about the similarities in our experiences. I thought that my silence would make me a better friend.

The medication eased my symptoms. The anxiety and intrusive thoughts decreased, and I began to feel as though I could survive motherhood. Notice I used the word survive and not enjoy. Enjoying motherhood felt like a myth, an impossibility. Surviving, I thought, was the best I could do. When I followed up with the pediatrician, she told me to give the medication some more time and that I should be feeling completely normal by the time my baby turned one-year-old.

That doctor meant well and she took me seriously, but it is now obvious to me that she was not properly trained regarding pre and post natal mood disorders. At the time, I knew no better and felt too weary to research. I did as told.

So many parts of that first year with my lovely daughter are fragmented memories. If I had to pick just one word to describe myself at that time, the word, without a doubt would be confused. How could feelings of bitterness, anger, and resentment belong to the same woman who fell in love time and time again with her baby girl? And how could this same woman love so deeply, yet seldom want to spend time with the object of that intense emotion? Nothing made sense. I recognized my face in the mirror, but the mind inside was not my own.

Panic attacks also invaded my life, but I didn’t know what they were, and now I shake my head and sigh that I had mistaken them for allergies.. When Pumpkindoodle was four-months-old we moved from Washington, DC, to Tyler, Texas. I noticed that every time I went to the grocery store, or stayed home alone, my breathing was labored. Since I was diagnosed with mild asthma several years prior, I thought that something was triggering my asthma. I hadn’t had an attack in five years, but was certain that the climate change brought it on.

Since motherhood has so many struggles, and PPD wears so many masks, I cannot tell you if my symptoms ever went away. I can write that I did not get the appropriate help during my first round with PPD, which could be why my second round was even harder. I can also write that until this past December, I felt like a complete and utter failure. I didn’t understand why God gave me children, because I was certain that having me as a mother would ruin their lives. Oh, how the truth, the beautiful, beautiful truth has set me free.

…and provide for those who grieve in Zion— to bestow on them a crown of beauty instead of ashes, the oil of gladness, instead of mourning, and a garment of praise instead of a spirit of despair. They will be called oaks of righteousness, a planting of the LORD for the display of his splendor. Isaiah 61:3

Posted by Mrs.Naz@BecomingMe at 6:05 AM

I am so glad you are not in this place anymore. It's a terrible place to be, isn't it?

How true that being honest with ourselves and others is so incredibly freeing. It's TOUGH! I often think that my testimony will be less effective, I won't be able to be there for others, or I will just be alone if I am authentic. Often times it is the opposite that is true.
To see the picture in this post contrasted with the picture from your previous post is really awesome. Your smile, in the picture with Pickle, is RADIENT! Praise the Lord! He is so good. He is so all about grace and redemption.
THANK YOU for sharing!!

I feel like I was reading about myself. We are TTC our third baby and I'm so scared about having PPD again. After My son was born it was horrible. There were days where I could barely function on the inside, yet everyone thought I was fine on the outside.

Oh, you are so beautiful. I am so glad you can write about this now, but I'm so sorry you ever had to feel those things. It is wonderful you can share this because I know so many people that have gone through the very same thing, and feel so alone when they are so not alone.

This brings back so many memories. I have to admit that it is part of the reason why we have not had another child. Even understanding more about it doesn't make me feel very confident that I could handle it.

Your blog is beautiful. Thank you for sharing so candidly.

I'm going to send this to my friend. She is going through this right now and I am praying for her to get through it... Thanks again for sharing your story.

I know that feeling.. all too much! thank you for sharing!

I am so sorry that this happened to you. It sounds simply horrible. But please know that you ARE a WONDERFUL mother. - Kel

I think this series of yours is courageous and insightful and ministering to many. You will surely be blessed for it!

So much truth and so close to home for me. Thank you
xx

Thank you so much for sharing your story I have sent it to a few friends with your blog addy.

Wow. That is so touching. So many of the things you said rang true in my heart. My first year with Bubbalu was very trying as well.

I know how it feels to keep silent because you are afraid of what response you will get...

I'm so glad you're sharing this. I'm fairly new to your blog and haven't read the other volumes on this subject, but as I read your vulnerable honesty in all this I'm convinced the Lord is using you mightily to do a healing work in your own life and in many others lives!

Wow, what a story. I'm sure sooo many women can relate. You are doing a powerful thing by sharing your experience. If just one person can identify, then what an amazing thing it is!
Thanks for the comment. I look forward to getting to know you better through this blogworld!
Cayce
An Uncluttered Life

Thank you for sharing. I had a similar experience after my daughter was born. It took me so long to get some help, and then it only made me survive motherhood. Thankfully, 9 months later I was able to recognize I needed more help. If only I could have found a blog like yours almost 5 years ago. I am sure you are helping many who are wondering if they may have PPD.

I Know the Lord does not allow us to experience issues in life to keep it to ourselves, although we may not like nor understand certain events we must go through, just knowing that he holds and carries us through each day gives us the strength and faith we need to trust him with all that happens in our lives. I know I experienced a time like yours when I had my second child, it didn't last very long but it was real and it happened. I know talking it over with my husband and getting support is what helped me through. You will be such a witness for the Lord and will help many by being so real and open. and that openess will be a part of healing in your journey.

God is so good and so sweet and through it all he carries us, sometimes drags us and holds us.

God bless you on your willingness to share so deeply with us. I know God will use this mightly to help many. I experienced some of the things you have shared. I am so glad God is faithful. Blessings to you.

Thank you for sharing your story with us. It takes guts! I'll be back to read more, you have captured me!

Thank you (again) for your honesty and authenticity in sharing your journey through PPD...it is encouragement many women need to hear!

So glad you are on the other side of this struggle. Thanks for your honest transparency in sharing.

I am really looking forward to reading the rest of this series. Thank you for sharing it.

Thank you for speaking out on this issue. The more women who are aware, the more who can be helped and saved without so much suffering.

What a blessing that you are sharing your struggles. It will be such a help to so many!

I never had to deal with the pain of PPD, but I so appreciate you sharing your ordeal with others. God will use your posts and your heart to impact other women's lives!

You are doing a very important thing by sharing your story, Angela. Blessings, my friend.