There's No Mess Too Big for God's Vacuum Cleaner

(This morning, I awoke with a strong desire to re-publish this story I wrote in February when Becoming Me had a readership of about 10 people. Originally titled Trash Day, this piece is very close to my heart. I spent more time writing and re-writing this story than any other I've written. The message is in the title and for me, the main mess in my heart was an unforgiveness...not just of others, but of myself. I pray the message blesses you. - Angela)

Courtney’s least favorite day of the week was trash day. A tried and true pack rat, she waited until she heard the squawk of the garbage truck brakes before she hauled her refuse to the curb. The large black plastic bag in her kitchen overflowed with snack boxes, fruit peels, candy wrappers, Styrofoam take-out containers, and gobs of UGO’s-- unidentified gooey objects.

Using her right hip to hold open the refrigerator door and her left arm to secure the monstrous bag of grime, Courtney added plastic containers of molded food and a carton of cracked eggs to the pile. With an empty cereal box she smashed the garbage as far down as it would go, somehow stretched the plastic red handles into a knot, and schlepped the bag she referred to as “Jabba the Junk” toward the back door.

The screech of the garbage truck alerted her that Billy, the truck’s driver, approached her curb. Leaving the bag behind she raced out screaming, “Billy, wait, I’m coming, I’m coming.” 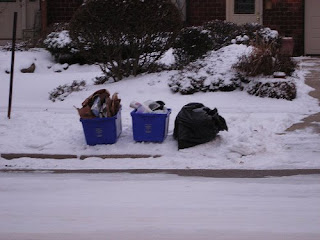 y, “I’ll give you an extra 60 seconds today Mrs. Gunner, but then I best be going, there’s a big storm on its way and the wind is really picking up.”

The screen door slammed behind her and she made a second attempt to drag “Jabba” to the door. As she dragged, Jabba split, first at the bottom, and then at the sides until Courtney found herself surrounded by trash.

Three houses down from Courtney’s home, Dana Kannon jogged into her living room, monitored her pulse, and gulped from her water bottle before sprinting upstairs for her morning shower. Dana’s trash bags, along with the two containers of recyclables, were taken out that morning before her daily run. Knowing that meteorologists fore casted wild weather, Dana made certain that her containers were secure.

As soon as her fingers touched the white laced shower curtain, chill bumps bloomed on Dana’s arms. The fierce gnarling wind rattled the windowpanes and Dana’s sense of security. Suddenly, another sound swung her from a state of shakiness to one of quaking trepidation. Shattered glass. Dana couldn’t recall walking downstairs, but the scene that awaited her would be shackled to her consciousness. Garbage. A gargantuan pile of someone else’s rancid dross had been wind flung through a window and served on her Granadillo formal dining table. What was once pristine was now covered in filth.

Two women with differing personalities, philosophies, and habits with one stinking similarity, each owned a mess to clean up.

As I examine my life I can recall times when I was like the fictitious women in this story. Like Courtney there have been messes caused by my negligence, sins, and mistakes. The mirror of my past reflects broken relationships caused by insecurities, debt resulting from overspending, and angry tirades as I pursued perfection. I have spent years hiding my self-wreckage in a dark closet of blame and excuses. 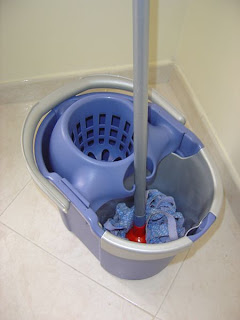 There also have been times when I was a Dana, living how I should be living, but blasted with another’s trash heap. Verbal attacks, betrayal, and deception pummeled me just like the bag of trash splattered on Dana’s table. Moreover, I put those into a box labeled “victim” and hid them.

The trash’s origin makes little difference at clean up time. Refusing to clean a mess that someone else made or started to make doesn’t hide the smell. Stamping my feet and wailing, “It’s not fair,” may garner sympathy but it won’t rid the stain. There are lots of things I can do with a mess. I can analyze it, call an expert to examine it, investigate its inception, and give it a fancy name like “dysfunctional matter.” I can even cleverly arrange a few pieces into abstract art. But, I absolutely cannot expunge it from my life unless I hold my nose, dig in, and toss away every last crumb. Even a morsel left behind will rot and mold causing a stench permeating through the soul.

It takes more than a twitch of the nose and a bottle of bleach to cleanse life’s heavy-duty messes: a marriage marred by infidelity, a career desecrated by deceit, an innocent one shamed by scandal, and a family smudged by divorce are just a few examples of common messes. When overwhelmed by chaos, how can order be restored? It starts with a powerful cleansing agent.

As a Christian I have been washed clean by the blood of Christ. Every sin ever committed and ever to be committed plastered Christ’s perfect body. When I mess up or when someone else dumps a mess on my turf there is no cleansing agent more powerful than the truth of God’s word.

In Joshua 1:5 God promises “I will never leave you or forsake you.” I’m glad I don’t have to go about my cleaning by myself; because when I do take that approach I just end up making a bigger mess. Cleaning up with God isn’t always easy. He is thorough and the labor is exhausting but you had better believe the job is done right. When the smell of the trash makes my stomach queasy, my back ache from the toil, and my eyes sting from salty tears, my Prince of Peace is 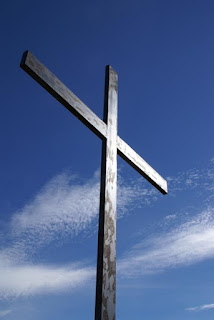 beside me each step of the way brushing back my hair, holding the trash bag, and whispering “draw closer sweet one, you can do this. With me, you will see the beauty underneath this garbage. I promise.”

Some trash piles take longer to clean up than others. Many appear obliterated but small spores left behind fester and grow into a bigger mess. Sometimes it takes years before a mess is noticed or owned. When the cleaning gets tough, and rest assured it gets tough, solace exists in knowing that cutting through the dirt aligns me closer to my savior. Regardless the heap’s depth, stickiness, or odor, it is cleanable. And there is no scent more fragrant than the distilling love of Christ.

“The sting of death is sin, and the power of sin is the law. But thanks be to God! He gives us the victory through our Lord Jesus Christ. Therefore my dear brothers, stand firm. Let nothing move you. Always give yourselves fully to the work of the Lord, because you know your labor in the Lord is not in vain.” I Corinthians 15:56-58.


Posted by Mrs.Naz@BecomingMe at 8:52 AM

you have a lovely talent for writing! I throughly enjoyed reading that!

Thanks for visiting my blog! I'm sure I'll be back to visit yours again as well!

you are so SO talented. keep on writing so I can enjoy more!! i subscribed too!!
you are all in my prayers - for next week especially!

What a thoughtful post! I'm glad you found me so I could find you! :)

Thank you for stopping by Laced With Grace. I enjoy reading this post.

angela, he talent you have! This is a great beginning to your newest site! I will be lurking

really great post! I found you over at Refresh.

Would you be interested in reveiwing Christian fiction/non-fiction on your blog?

Email at amyalathrop@gmail.com for more info.

You are a gifted writer, I hope you're sending your stuff out to publishers.
Thanks for dropping by,
Mama Bear

Yes, you are a beautiful writer and person and you inspire me!

Great illustrations you used to illustrate your point. I enjoyed reading this.
Thanks for stopping in to my blog.
Vickie

that is incrediable! It really made me think about some things I have going on in my own life right now. Thank you for posting that again!

Beautiful! I enjoyed reading that.

I love the little spores. How often I leave those behind only to be lam-blasted by the mess they make as they grow in secret. Thanks for the reminder

I was just working on a new post titled "Walking in the Light" which is about battling sin in my everyday life. I sometimes need to take a break from typing and I stopped by your blog. I feel so blessed to have stopped when I did. I love this piece, can I link it at the end of the blog I am currently working on??

Thanks and blessings,
Ronel

A post certainly worthy of a rebroadcast! Thanks for sharing, twice!

You write so beautifully! I loved reading this. Thanks.

I was looking and thinking i didn't write on this, but I guess i did in feb! lol.. another take is always good, and yet another thought perculates from it!

I’m glad I don’t have to go about my cleaning by myself; because when I do take that approach I just end up making a bigger mess.

that really hit me reading this again... so true!

I'm so glad you came by my blog today!

Yours is just lovely, and you are such a talent at writing!

I actually shivered to think of my junk dumped on Jesus...wow...powerful stuff!

Keep up the good work!☺

Great story, I love it!

you are a great writer!

The Random Recipe thing- I do it every other Friday (usually) but I put the post up on Thursday. Since I work, I can't post it on Friday until later in the day - that is why I put it up Thursday. Anyway- I try to keep it on my sidebar the date and theme for the next recipe exchange. Please join in anytime!

(Forgive me if this is repetitive...when I attempted to leave my comment, it gave me an error and my comment went blank!)
===============
So glad you reposted this (I didn't yet have a blog when it was originally written.)

What a vivid illustration! I've walked in the shoes of both Courtney and Dana. How easy it is to hide behind blame and excuses, or to take the victim route and remain stuck (and bitter).

Praise God He takes such joy in working with us to clean up our messes (when we let Him, that is).

Thank again for this beautiful message. Thanks too for stopping by and leaving a sweet comment for me today.

You should write a book! You are talented! God has given you a gift, and through your story, I was moved! Thanks for your inspiration!

Thanks for visiting my blog, too~

What keeps coming to my mind is:

Thanks for bringing this up to the surface.

Your heart is precious!

thanks for sharing this